Just like the Flying J and Pilot Travel Centers serve over-the-road travelers passing through Quartzsite in 2009, the Tyson’s Well Stage Station met the needs of travelers beginning back in 1866. While today, travelers get premium bottled spring water and unleaded gas or diesel, back then, the adobe stage station did much the same. It became the town center with a grocery store, lodging, food and nearby saloons. It offered water and grass for the horses. Both the modern Travel Centers and the historic Stage Station can be called way stations on the route of California through Arizona.

Much time has passed since Tyson’s Well Stage Stop served travelers. History notes that the Stage Stop was converted to a hotel – the Oasis Hotel - as an adaption to the introduction of railroad transportation. In time, the Oasis Hotel fell into disrepair. Then in 1972, the property owners donated the stage station/hotel for yet another transformation into a museum. The Quartzsite Historical Society took responsibility for the restoration and opened the Tyson’s Well Stage Stop Museum in February, 1980. 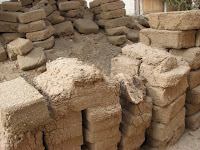 Visitors to the Tyson’s Wells Stage Station Museum can still see some of the original adobe walls of this way station. These walls were retained and a shell of stabilized adobe brick was built around the original walls to protect them. Others, beyond salvation, were rebuilt.

Inside the museum, displays offer an eclectic mix of photographs and personal possessions from folks who called Quartzsite home. Most of the displays seemed a bit dusty with yellowed labels. The display of an old school house seemed tired. And, the mannequin with overlong lashes looked tacky in her frontier woman dress and bonnet standing next to the only modern item in the museum. A digital photo frame hung on the wall beside her. Half-a-dozen or so photos of desert fauna faded into one another in a continuous loop. This seemed out of place with the historical nature of the museum. 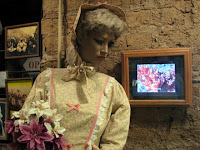 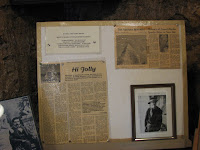 Laminated newspaper articles, too much to read, talk about Quartzsite characters. One article was about Hadji Ali. Known as Hi Jolly, this cameleer came to the US with a shipment of camels in 1857. The plan to use camels in the Arizona desert failed but Hi Jolly stayed in Quartzsite. Two model camels set on the front porch of the museum as tribute to this historic icon. Real camels, I was told descendants of Hi Jolly’s camels -actually live on a ranch in nearby Yuma.

There’s a fine museum display of equipment from the time when mining for gold, lead, and mercury played an important part in the Quartzsite economy. In fact, the Assay Office from the Marquita Mine shows just what a mining office might have been like years ago. 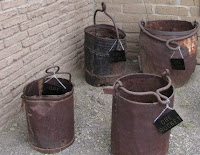 The mining equipment and the authentic adobe walls were to me the best value found in the museum. Still people will be drawn here when they tire of visiting the tent vendors who make Quartzsite a renowned place for winter snow birds and rock hounds. Like them and travelers before me, I was just passing through Quartzsite and decided to stop. 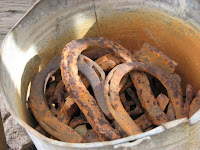 Termite
"The only thing better than telling old stories is creating new ones." Some call it wanderlust. Others say my lifestyle is counter-culture. For two years beginning in September 2007, the journey began aboard our Prevost motor coach,bus conversion. We logged over 28,000 as I chronicled this extraordinary journey filled with experiences on this blog. Then in 2010, a new bold journey began - living in Switzerland and touring Europe.